So many of my worlds came together today and made it one I will never forget.I saw lots of friends, made others and watched the best riders in the world climb "my hill"–Lookout Mountain.

I've struggled to understand what made it so amazing to see these cyclist zoom by in a few seconds leaving thousands of people to scamper 1,200 feet down the mountain to collect on the streets of Golden and see them flash by again. They could almost be anybody riding by, really. It's not like they ride a bike differently than anybody else.  Faster for sure, and I admire their strength and skill and marvel at their speed and endurance but I think what makes it so special as a spectator is being part of the event–a world class event.
The sport of cycling is far different on television than it is in person. You really don't see much in person but a blur of cars and cyclist passing by at incredible speeds.  T.V. can show the peloton's position, team tactics, breakaways, and beautiful scenery. But to be a spectator is to be a part of it. Other than staying out of the way, there are no rules, no seats, no stadiums, no tickets. It's pure and simple–show up on the road and cheer and marvel at not only the cyclist but at all that surrounds them. The motorcade of support vehicles and team cars top-heavy with bikes and wheels mounted every which way.  The helicopters, sirens, horns and people dressed in all kinds of outfits hoping for their ten seconds of fame on T.V. 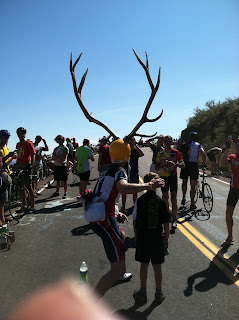 To have a race of this magnitude on roads I ride, going through the neighborhood I grew up in, passing my old high school somehow makes me appreciate my home even more. These riders can ride anywhere in the world. This race could've been anywhere, but they chose "my backyard". Can you imagine the super bowl being played in your neighborhood park?

People of all kinds came to watch. On Lookout, most rode their bikes up and were there early to draw signs on the road and cheer people, especially kids, riding to the top. Presumably some School of Mines engineering student wrote huge numbers for about a mile up the road–it was Pi! Cyclist watching cyclist all marveling at something different, there for various reason, yet watching the same race. Some to cheer a favorite rider, some to see just how fast they climb, others just to see the entourage. I just wanted to be there. I had no agenda. I was thrilled to "share" my favorite ride with the best and dreamed what it would be like to climb through the hysteria of people screaming and running beside me.