Author, runner, physician and philosopher George Sheehan, who wrote the New York Times best seller "Running & Being: The Total Experience" once said, "when I run, I am an old man. When I cycle, I'm a kid again." 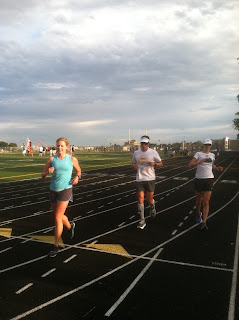 With all due respect to the late Dr. Sheehan, I think the line should read, "When I jog, I am an old man. When I ride a bike or run as fast as I can, I'm a kid again." At least that's what I did when I was a kid, I rode a bike, I didn't cycle, and whenever I ran, I just ran as fast as I could as far as I had to run.

(At left, Amy, Jon and Malia warming up)

Last week at our first team track practice at North High School in Denver, I ran like a kid again. I often ride my bike, those are the days when my coach basically says "endurance ride", which means go long, moderately hard and have fun exploring! But, generally when I run I have a purpose. I get those same prescriptions for running, but I must admit, I rarely feel like going for a run so even those "loose" parameters don't necessarily make me enjoy the run workout. The only exception is a trail run or a run in the rain. Both for some reason relax me and help me focus on just running.

So how is it that running at a track with very explicit pace targets and finite distances makes me feel like a kid again? First off, tracks are at schools so it's hard not to feel a bit nostalgic with students playing soccer (my high school sport) and others just hanging out at the track after school. Secondly we ran as a team, all starting and stopping at the same spot so it felt a little bit like I was racing with my boyhood buddies. Then, some students from the cross country team started running with us and it was fun to see their youthful exuberance and challenging to try and chase them down–which I didn't. 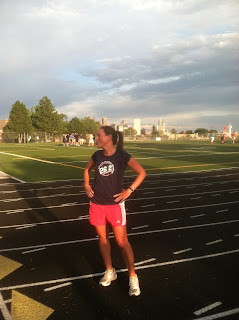 But most of all, I just enjoyed running as fast as I could for the given distance. We started with three 1,200 yard runs (3 times around the track). On a track it is easy to know the distance and dig deeper to keep going around. On the road, generally, there aren't markers or landmarks at known distances and even a run as short as a mile is a bit enigmatic and I think subconsciously keeps me from going all out at times.  We then ran two 800's followed by two 400's. On the 1,200 and 800 runs, our coach gave us some target times, but simply because of the competitive atmosphere I think we all ran a bit fast. But on the 400's, we just went as hard as we could. I seem to get stronger over time and by then the elusive "runner's high" had kicked in and I had a blast chasing the high school runners who joined us. I managed to do a lap in 1 minute 11 seconds which I think is pretty darn good for a 46 year old who hasn't sprinted much in years and who just ran 3 miles!

Chasing those students reminded me of summer days running through the field with my buddies to see who could get to this or that first. Afterwards we all gave each other high fives and hopefully they will come back next time we practice together.

From a training perspective running on a track is like a lab. Everything is known and consistent. I asked coach Lindsay why she likes track work and she said, "consistency, consistency, consistency." It's flat, it's exact and the only variable is your body. As she gets to know us and analyze our running, she will be able to dial in paces we need to hit to help us get stronger.

Yesterday she prescribed a track practice for me that I did alone and she gave me target times and distances. It was hard, and kind of fun, but not as fun as chasing my buddies like when I was a kid!